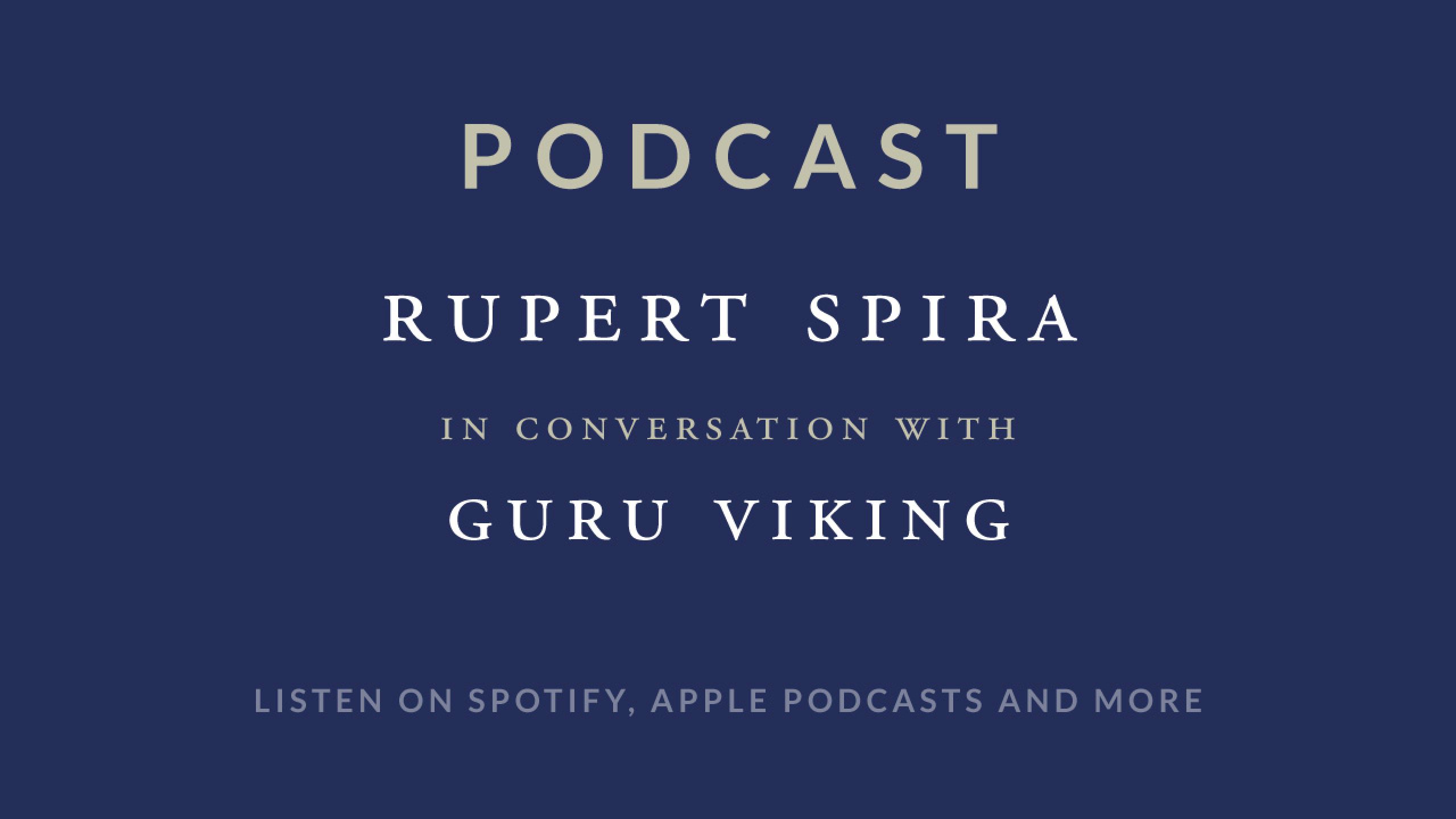 Steve James, aka Guru Viking, is based in the United States and works globally with elite athletes and performing artists on matters of high-performance as well as spiritual introspection.

To frequent listeners of Rupert’s podcast conversations, this episode with Steve will likely strike them as a bit different. Rather than being asked at the outset about the topics he generally speaks and writes about, Rupert is invited instead to share about his earlier life experiences – growing up, then establishing himself as a renowned ceramic artist. He recounts in depth about his childhood, upbringing and education, both at school and later as Michael Cardew’s apprentice, which led to his understanding of the spiritual nature of art.

After relating that, at age seven, he told his mother his view that ‘everything is God’s dream, and our job is to make it as pleasant as possible’, Rupert surmises that this childhood intuition hasn’t evolved very much.

Later in his youth, he found himself on track for a career in medicine or biochemistry. Then, in his mid-teens, after a science lesson at school, he was viscerally gripped by another realisation, that ‘there could be no end to objective knowledge, and there was no certainty because there would always be something else, one discovery after another’. He saw that science could never be a complete exploration of reality, could never answer existential questions. He wanted to find out what could be known for certain.

This coincided with his being introduced to the power of art, via an exhibition of the pots of Michael Cardew, and his attending Colet House in London, where he studied various spiritual disciplines. These two powerful influences reawakened his feeling for the divine and set him on a different path.

He goes on to describe how the apprenticeship with Cardew was about far more than just learning how to make pots; it was a whole way of life, transmitted indirectly, as much through Cardew’s penetratingly cryptic utterances as what was not said. It was a monastic existence involving gardening and cooking for an old Zen master, with pottery almost solely in his spare time, and Rupert says he learnt more during these two years at the edge of Bodmin Moor than during his whole expensive education at one of Britain’s finest schools. He was learning about the power of objects to transmit beauty and authenticity, and, with this knowledge as his foundation, he spent the next thirty years as a potter.

All this time, Rupert says, he was seeking to create something that expressed a quality he found elsewhere, especially in Far-Eastern ceramics, but almost never in his own. Until one day, towards the end of this period, when he felt he’d done everything he could in this medium. He had already met Francis Lucille at this point, and when this new possibility for exploration opened up, he surrendered himself to this new master, and the next chapter began.

Rupert wonders if this too will come to an end, when he feels he’s done everything he can with words and perhaps finds he has gone from clay to words to silence.

The two then talk about fame and the cult of personality; how projections are subtly and not so subtly encouraged by those who are well known, in both the art world and that of spiritual teachers. Rupert says that for his first couple of years as a speaker he was naive, but then he realised it was his responsibility not to pretend that such projections were not taking place. Rather, it was to see, understand, and learn to deal with them.

When Bernardo Kastrup told him, ‘the more you do to throw yourself off the pedestal, the higher it becomes’, he recognised the truth in that. So, he says, he now takes a lot of care in his retreats not to send any message that he considers himself different from anyone else there. But he also understands the nature of the projections people can make, and the reason for them. And, most important, he recognizes that the way to deal correctly with acclaim and adulation is to provide no place for them to stick; in other words, through freedom from ego.

The conversation ends with Rupert describing how his love of beauty and truth, initially expressed in two avenues – art and spiritual enquiry – have come together, and the two avenues are now seen to be facets of the same thing. A conflict he had experienced for many years was resolved and integrated, and his life was unified. He is now in a position to see, and truly know, that for many artists, like Cézanne for instance, art is the means by which the exploration of reality is accomplished, and it is therefore of the highest spiritual order, akin to being a mystic.

Listen to the full episode on Spotify, iTunes or Podbean.