A Man in his Elements: Rupert’s pottery process 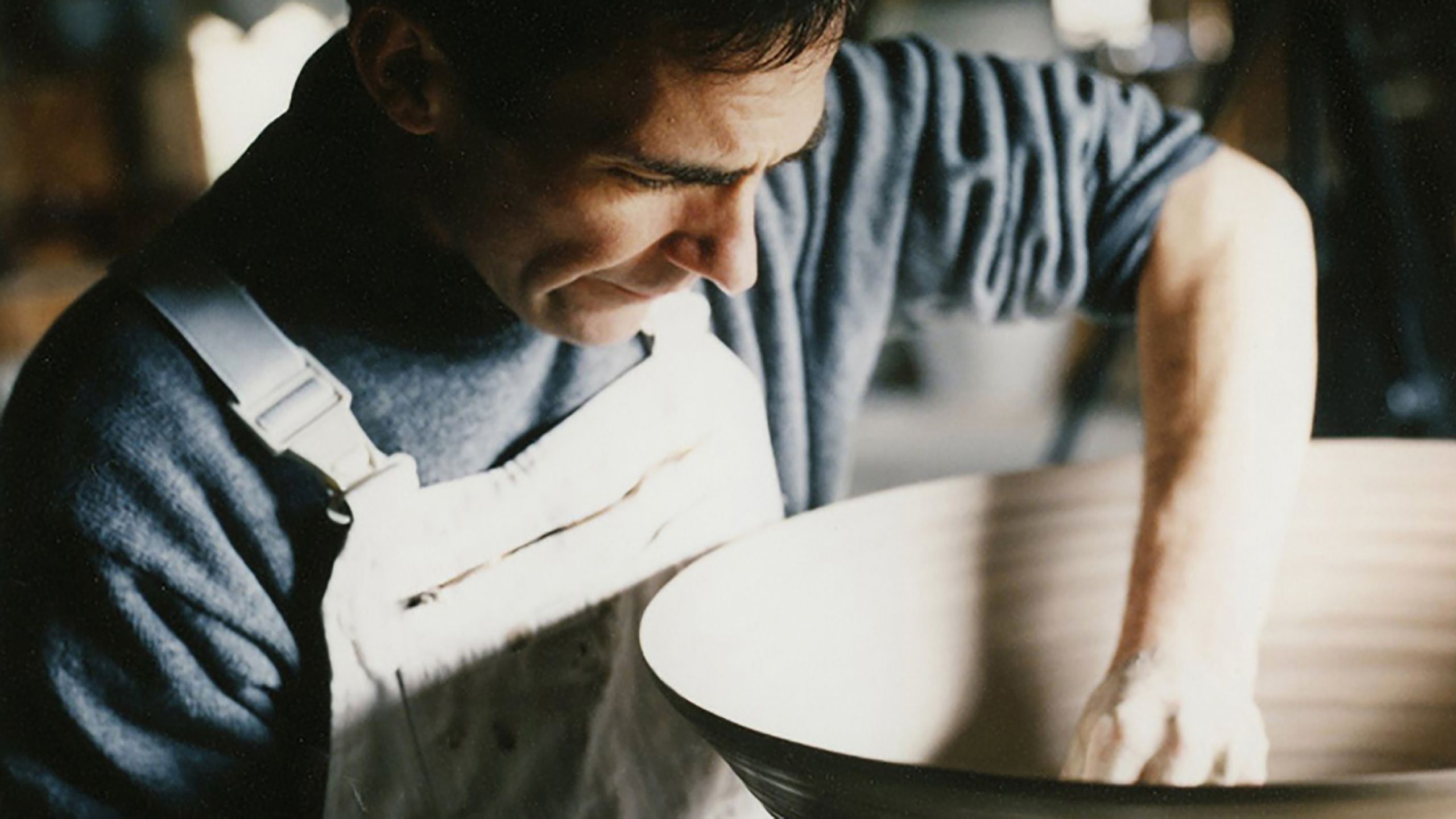 In May and June 2015, the Oxford University Ceramics Gallery held a retrospective exhibition of Rupert Spira’s work in ceramics. The following essay was written for the exhibition catalogue by photographer, and former wife, Caroline Seymour. As a fellow artist and lover of truth, Seymour contemplates Rupert’s pottery as an alchemical transformation of elements, and she traces the development of his career in ceramics and its evolution into speaking and writing about truth: ‘from form to emptiness to empty form’.

Fire is not matter
Is heat, a sensation
Yet is not any thing
But pure energy,
A revocation of all that was
A crucible and a beginning

Pots are forged in fire. In this process the elements are at play. The water element flees its earthy container in the presence of fire and becomes air. What remains is scorched earth that has stiffened and is once again capable of holding water. A bowl is a gesture incarnate, hands forever cupped, to offer and receive the gift of water.

Rupa means form in Sanskrit. Rupert Spira is now over halfway along a trajectory in his life moving from being a supreme and prolific creator of form to a point where now the creativity is undimmed but the form has become more formless, intangible. From the early days of ultra-earth at Wenfordbridge with Michael Cardew, through Froyle and Church Farm, to the Oxford apartment and the falling away of the pottery. He no longer makes pots.

The bowls were thrown to their utmost, taken as far as was possible on the wheel, as fine as they could be before disappearing altogether. Then all that remained was the writing, the creation of an immaterial bowl, the container described not on the wheel but in words.

The pots appear as objects. But these forms are the fruit of a process and an intense engagement with materials and elements, involving earth, fire, air and water, fused by human hands. The pottery workshop is the alchemical laboratory in which crude materials, unrefined, are studied, observed in their transformations, subjected to heat and tested, and are then understood from the bottom up.

These are the processes: from form to emptiness to empty form. From manifestation to immateriality. From earth and fire to words and finally silence.

The pottery grew me

In the long Shropshire winters it is still dark in the morning when Rupert leaves the warmth of his kitchen and walks across the yard to the pottery. Sometimes his assistant, Kofi, has arrived first and has lit the wood-burning stove, but often enough Rupert walks into a cold, dark workshop with stone-flagged floors and unplastered rough stone walls. He wears up to five layers on his torso and three on his legs, once the overalls are on. It is bracing. An assault, even. Sometimes Kofi will be unpacking a kiln which has cooled down overnight from yesterday’s firing.

For all the mastery of his craft — years of meticulous research into glaze chemistry, careful planning of the packing of the kiln, the placement of those large, gravity-defying bowls neither too close to nor too far from the burners, and a firing schedule with just the right rate of increase in temperature and right amount of reduction of oxygen at critical points, achieved by opening and closing the dampers — for all this preparation, there is a fundamental wild card of unpredictability in the production of pots: the moment of truth when the kiln is unpacked.

Twenty-five years earlier Rupert had received a postcard from the man who became his first real teacher, in the fullest sense of the word, Michael Cardew, inviting him down to Wenfordbridge, on the edge of Bodmin Moor in Cornwall, for the unpacking of a firing. This was a major event, unchanged over centuries from how it must have been in twelfth century China when the earth-and-brick kiln was broken open and those luminous yellow, celadon, blue and copper red Song Dynasty bowls Rupert prized so highly were extracted from the ashes.

After this Rupert left his degree course at Farnham for the monastic austerity of Cardew’s pottery and spent the next two years living, breathing, absorbing and learning from the powerful influence of the man, then eighty years old to Rupert’s eighteen. Cardew was charismatic, cantankerous and tender, like a true Zen master, and Rupert said he learnt more in his two years there than he had in his entire education at Britain’s finest public schools.

So to be greeted by cracked, collapsed, under- or over-fired pots on a cold and dark winter’s morning, only weeks or days before the deadline for an exhibition or the delivery of a commission possibly already paid for, was a regular occurrence. Rupert says that when he looks back he sees less a story of success than a string of failures. Although as the years went by there were fewer and fewer seconds, for every perfectly poised bowl to emerge from the kiln at the height of Rupert’s success and technical proficiency, there was a backlog of those that hadn’t made it.

The throwing and the bowls

Throwing pots for as long and as intensively as Rupert did is a physical feat which makes demands on the body and leaves traces. Let’s say he threw for two hours a day for thirty years; that’s 4.5 percent of his life spent sitting at the wheel, bending his torso right over to one side or the other, but because he’s right-handed, mainly to the right, his left shoulder up, right down, neck and arms tensed and flexed, the muscles of his entire upper body engaged in repetitive movements requiring strength and delicacy in equal measure. Now, as he stands straight, his left shoulder is slightly raised and his neck very slightly inclined.

How many pots has he thrown in his life? Impossible to say, but many thousands. And where are they all now? The ones that survived, living lives, he would hope, of usefulness and decorum, each cup, mug, plate or bowl bringing indefinable and lasting pleasure to the owner. Favourite cups or mugs can often themselves form part of a daily ritual around meals, as the repetitive motions involved in their making are echoed in time stretching infinitely forwards beyond the human span, in the breakfast routines of a household.

Imagine you are standing, silently and invisibly, beside him as he throws a bowl. This is what you would see:

First he takes a lump of clay, already wedged and weighed by Kofi. He slaps it down, then centres it as his right foot presses down on the pedal and the wheel slowly begins to turn. The bowl starts with both of his thumbs pushed down and drawn out, the ring of clay between thumb and fingers growing thinner as it widens. From time to time he slows the wheel and takes his right hand off to dip a small sponge into an old pot containing warm water at the side of the wheel; he squeezes it and water drops into the revolving bowl to keep the throwing fluid. The bowl takes shape as he bends over to look at it from side to side and from below, his movements sure, precise and economical, seemingly effortless, so well practised they’re almost automatic. Maybe the bowl throws itself. He takes it right to the limit of breadth and fineness before the laws of physics determine it must collapse, his head slowly moving and turning, following its rotation.

The throwing is over in minutes, maybe twenty for a large bowl. There are other processes to follow — the turning when it is leather-hard, glazing and decorating — but the throwing is the creation of form from undifferentiated matter, the drawing out, again and again and again, of a thing of beauty from a lump of clay.

Words as marks in space

First there were lines, painted and then etched with increasing and unbelievable regularity and fineness. Then a long poem appeared, which Rupert scratched with a needle through black pigment over white underglaze, all over his bowls, inside and out. He sat for hours, literally, writing these words, starting from the rim of the bowl and spiralling around and down into its well. In reverse of the lines, they began tiny, tight and legible, until the final bowls, on which the words can barely be deciphered amongst the rhythmic, gestural white marks flowing around the undulating forms. To watch him doing this was to witness a man in a kind of samadhi, a state of absorption it would have been unthinkable to attempt to interrupt.

One day, in his final year as a maker of pots, as he was etching the poem for the umpteenth time, the thought came to him, ‘I wish I could make bowls just out of words.’ This was the beginning of the end of the pottery, the appearance of an intention which ushered in the next chapter.

Rupert and his poem bowls: a man at the peak of his physical abilities producing forms whose power and beauty lie in the synthesis of a lifetime’s experience with a perfected technique.

He has himself been forged and transformed like a pot in the kiln, moving from the earthy vigour of his twenties and thirties, making enormous jars, building his studio and workshop, running his pottery and managing his business, employees and apprentices — a prince in his realm who could stand, spread his arms and survey his surroundings, saying ‘I made this.’ From this, through the devastation of an actual fire in the Shropshire barns that housed the workshops, to the increasing immateriality of his current creations: words on a page, or simply spoken. From form towards formlessness, a refinement of essence, the alchemical process that is the work of a lifetime.

River of Words: The making of pots