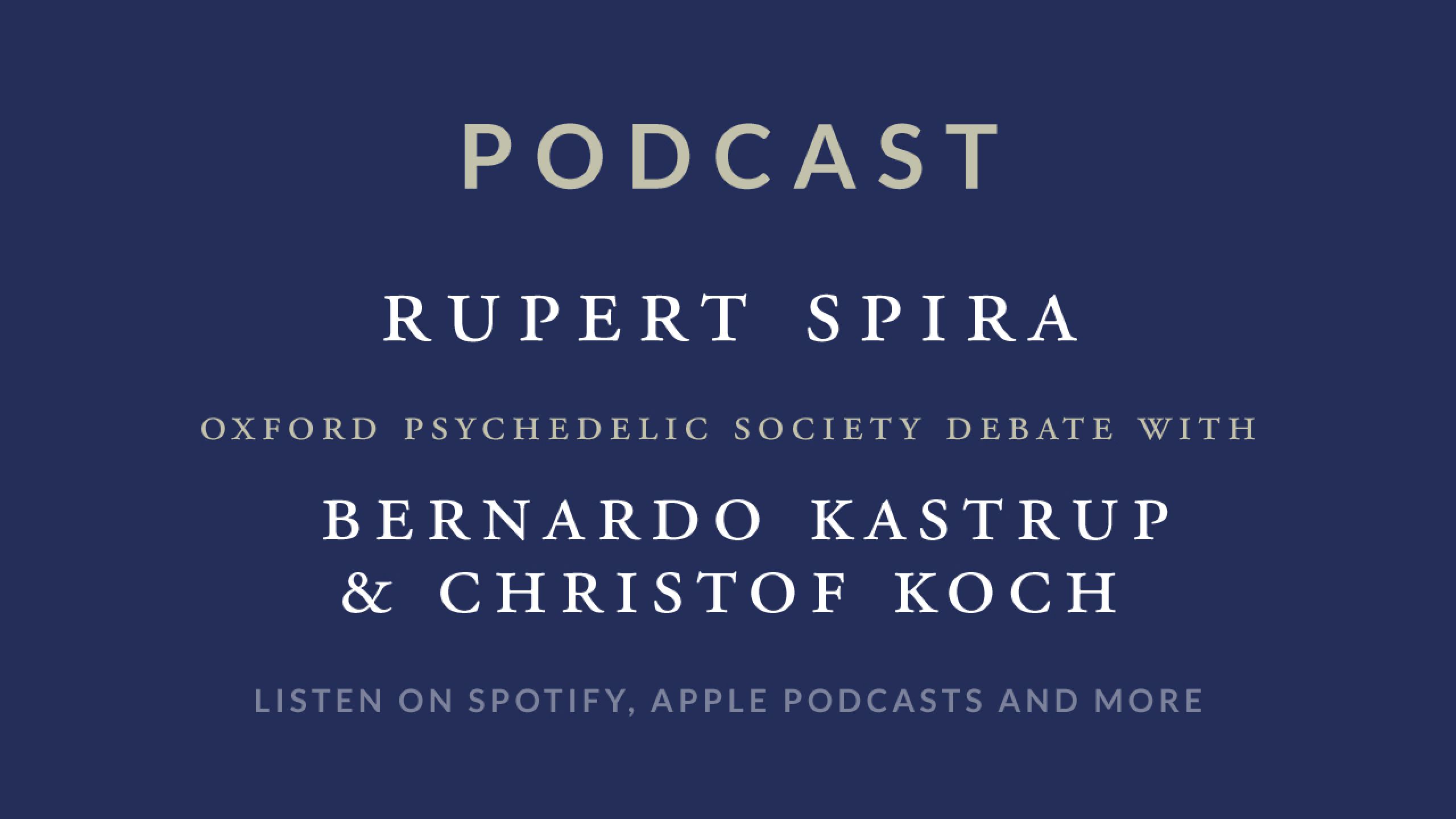 Science and the non-dual understanding: can they meet, agree, and if so, where? This podcast episode, presented in a debate format, and for which it is difficult to do justice in a brief summary, is a complex and fascinating three-way discussion among people at the top of their field.

Christof Koch is a neuroscientist whose life work is uncovering the neural correlates of consciousness. Bernardo Kastrup’s scientific background allows him to position himself somewhere between Christof and Rupert, acting to some degree as a mediator, although he is now in agreement with Rupert that consciousness is not a property of the brain.

First, Christof shares his view that ‘Consciousness is a system of intrinsic existence, or absolute existence, with maximum intrinsic causal power . . . and is ultimately the only thing that exists’. This seems to announce the likelihood of complete agreement among the three. He says later, however, that consciousness must have a physical substrate, and that brains that have ‘flatlined’, indicating no activity, such as you find in patients in vegetative states or comas, therefore indicate there is no consciousness.

As a scientist, Christof feels the need to test and verify any and all assertions in an empirical and meaningful way. He asserts, ‘Although all the clinical evidence points to nothing, can I prove it logically? No. But most things can’t be proved logically. I can just give you lots of clinical evidence.’

For Bernardo, such apparently inconsistent statements are evidence of what he calls the internal contradictions of physicalism, and of constitutive panpsychism (the belief that everything has some degree of consciousness), which give rise to what’s known as the ‘hard problem of consciousness’. ‘I think that all that ultimately exists is mind’, says Bernardo. ‘Not my mind alone, or yours. I don’t deny the existence of an objective external world that we call the physical universe, but I think that external world, as it is in itself, is mental. It’s constituted of transpersonal mental processes, which present themselves to observation as what we call the physical universe’.

Rupert sees human experience as part of consciousness, not the other way round. Consciousness is not something that humans, or any other beings, have. We can describe and measure the content of consciousness, but none of that tells us anything about its nature. That cannot be known conceptually, or objectively, through the limited mind of an individual. Consciousness alone can know itself, and it is infinite and universal.

Bernardo describes this in more scientific terms: the starting point is what he calls ‘universal phenomenal consciousness’, a spatially unbound field of pure subjectivity. He distinguishes this from ‘meta-consciousness’, which is what arises from that unbound field as a kind of localisation, or dissociation, to become a personal self.

Christof is invited by the moderator to give a brief explanation of his Integrated Information Theory (IIT), and Rupert then takes him through a series of questions about his current experience of being aware. There follows a discussion about whether there is consciousness in deep sleep, after which Bernardo acknowledges that there is a ‘huge conceptual divide’ between their respective positions. He sympathises with Christof’s exasperation but says he knows better than to attempt to bridge that divide conceptually.

They reach an impasse with Rupert’s question – ‘Have you ever experienced the absence of awareness?’ – to which Christof can only answer, ‘No! because then there is no experience! When I’m under anaesthesia, there’s no consciousness whatsoever’. Rupert responds, ‘There’s no experience. But not necessarily no consciousness’. For Christof experience and consciousness are synonymous, although towards the end he says he is certain that there does not have to be a self involved.

This podcast episode should prove especially rewarding for those familiar with the language of neuroscience and physics. Neuroscientists are involved in cutting-edge research into areas of the human mind – including the use of psychedelics, both for their therapeutic potential and for what they can tell us about consciousness. Psychedelic, in its derivation from Ancient Greek, means ‘clear or manifest mind’, which is what the work of all three speakers, in their own ways, attempts to reveal.