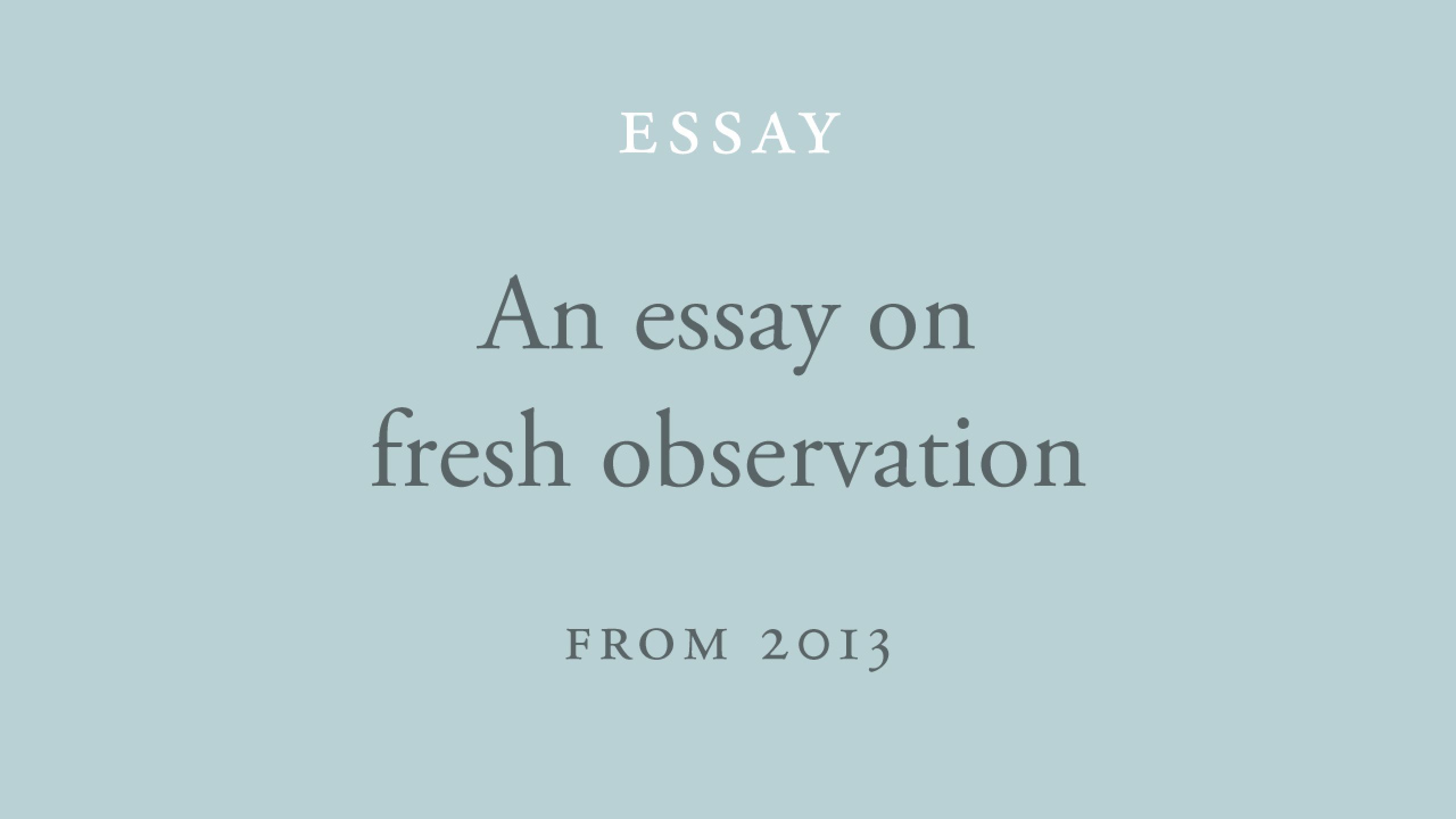 Well over a hundred years ago the painter Paul Cézanne said, “A time is coming when a carrot, freshly observed, will trigger a revolution.”

Has this revolution taken place, is it slowly taking place or is it about to take place? And what is the revolution to which Cézanne referred? How could something as insignificant, inconsequential and ordinary as observing a carrot trigger a revolution?

Cézanne meant that if we could see even a simple everyday object such as a carrot, as it truly is, our experience would be revolutionized. But what does it mean to see an object as it truly is? The key is in the phrase ‘freshly observed,’ which means to see clearly, unobstructed by the concepts that thought superimposes on our experience. In fact, most of us are completely unaware that our experience is filtered through a fine mesh of conceptual thinking that makes it appear very different from how it actually is.

As the Chinese sage Huang Po said, some 1200 years ago, “People neglect the reality of the illusory world.” The illusory world? Now that’s even more radical than Cezanne! It’s one thing to look freshly at a carrot, spade, house or world, but quite another to consider it an illusion. What did he mean?

We often hear phrases in the non-dual teaching such as, ‘The world is an illusion.’ But such phrases may create a rebellion in us, for we know that our experience is very real.  So how to reconcile these two positions – one, ‘the illusory world’ and two, the undeniable reality of our experience?

Anything that appears must appear in or on something. For instance, an image appears on a screen; a chair appears in the space of a room; the words of a novel appear on a page; a cloud appears in the sky.

What about the mind, body and world? Our only experience of them is what currently appears to us as thoughts, images, feelings, sensations, sights, sounds, textures, tastes and smells. In other words, all we know of a mind, body or world are appearances, and all these are continually appearing and disappearing. We may have a concept of a continuously existing mind, body or world, but we never actually experience such an object.

As Cezanne also said, “Everything vanishes, falls apart.” All we know of the world are perceptions that continuously appear and disappear. However, anything that appears and disappears must do so in or on something. What is that something?

Start with thoughts: wherever our thoughts appear is obviously what we refer to as our ‘self,’ ‘I.’ Our thoughts don’t appear outside of our self! However, we cannot see or find that ‘something’ in which thoughts appear because it has no observable qualities. As such, it is open, empty, transparent. But that doesn’t mean it is not known. It cannot be known as an object and yet it is not unknown.

However, they do not just appear in our self; they are simultaneously known by our self, for our self is not just present but also aware; not just being but also knowing. Hence it is sometimes known as Awareness – the presence of that which is aware – or the light of pure Knowing.

Now, having discovered that all we know of a mind, body or world are thoughts, sensations and perceptions, and having seen that all these arise within our self, we may ask where they come from and of what they are made. What is their substance, their reality?

If we leave a jar of water outside on a freezing cold night, ice will start to form in it. The opaque ice is made only of the transparent water. However, the ice appears to be something separate from and other than the water. It seems to have its own independent existence or reality.

Our experience is very much like this. The multiplicity and diversity of experience – thoughts, feelings, sensations and perceptions – appears in and is made out of our self. This ‘self’, pure Awareness, in which all experience appears, with which it is known and out of which it is made, is itself empty, transparent; it cannot be named and has no form, and yet it is the substance or reality of all names and forms.

All experience arises within our self, this transparent emptiness. And the only ‘stuff’ present in our self, out of which all experience can be made, is our self itself. It is our direct, intimate experience that all we know of a mind, body or world is made out of and is identical to the transparency of our own Being, the light of pure Knowing.

And what is present in our own self, prior to the experience of a thought, feeling, sensation or perception? Just itself, pure Awareness! All experience – that is, all thoughts, feelings, sensations and perceptions – is a modulation of the presence our own Being, the light of pure Knowing. The entire multiplicity and diversity of names and forms is made out of one transparent, empty, indivisible substance.

However, just as it is not possible to see an image without seeing the screen so, although this Presence is usually overlooked, it is never truly unknown. Just as all we really see when we are seeing an image is the screen, so all we ever truly experience is the transparent, open, empty presence of our own Being, the light of pure Knowing. All It ever knows or experiences is Itself.

Love is the common name we give to experience when the ‘other’ is no longer experienced as ‘other;’ when the subject/object relationship collapses. It is to see the appearance of an image but to know it only as screen. It is to attribute the reality of the image to the screen. It is to know everyone and everything as one’s own self.

It is this transparent, empty Presence that, refracted through the mind, appears as a multiplicity and diversity of names and forms. However, the mind is itself a modulation of that very Presence. In other words, it is pure Awareness itself which, vibrating within itself, takes the shape of mind and, from the illusory point of view of one of the selves contained within that mind, seems to see a multiplicity and diversity of separate objects and selves, each with their own independently existing reality. In other words, the separate self is only a separate self from the illusory point of view of a separate self.

All the great sages and artists from all times and all places have said or expressed this in one way or another. This is the one true revolution. At the root of all desire for change is this ultimate desire: to know only the reality of all experience; to know only love.

Unless and until the problems facing humanity are traced back to their ultimate source – the ignoring of this reality – they may be temporarily alleviated but will never be truly solved.

Does having a practice take me away from my true nature?

Should I let grace take its course or establish myself firmly in the seeing?

Are awareness and nothingness the same thing?