Home Introduction Blog Philosophy Is our experience proof that consciousness experiences itself only through one mind?

Is our experience proof that consciousness experiences itself only through one mind? 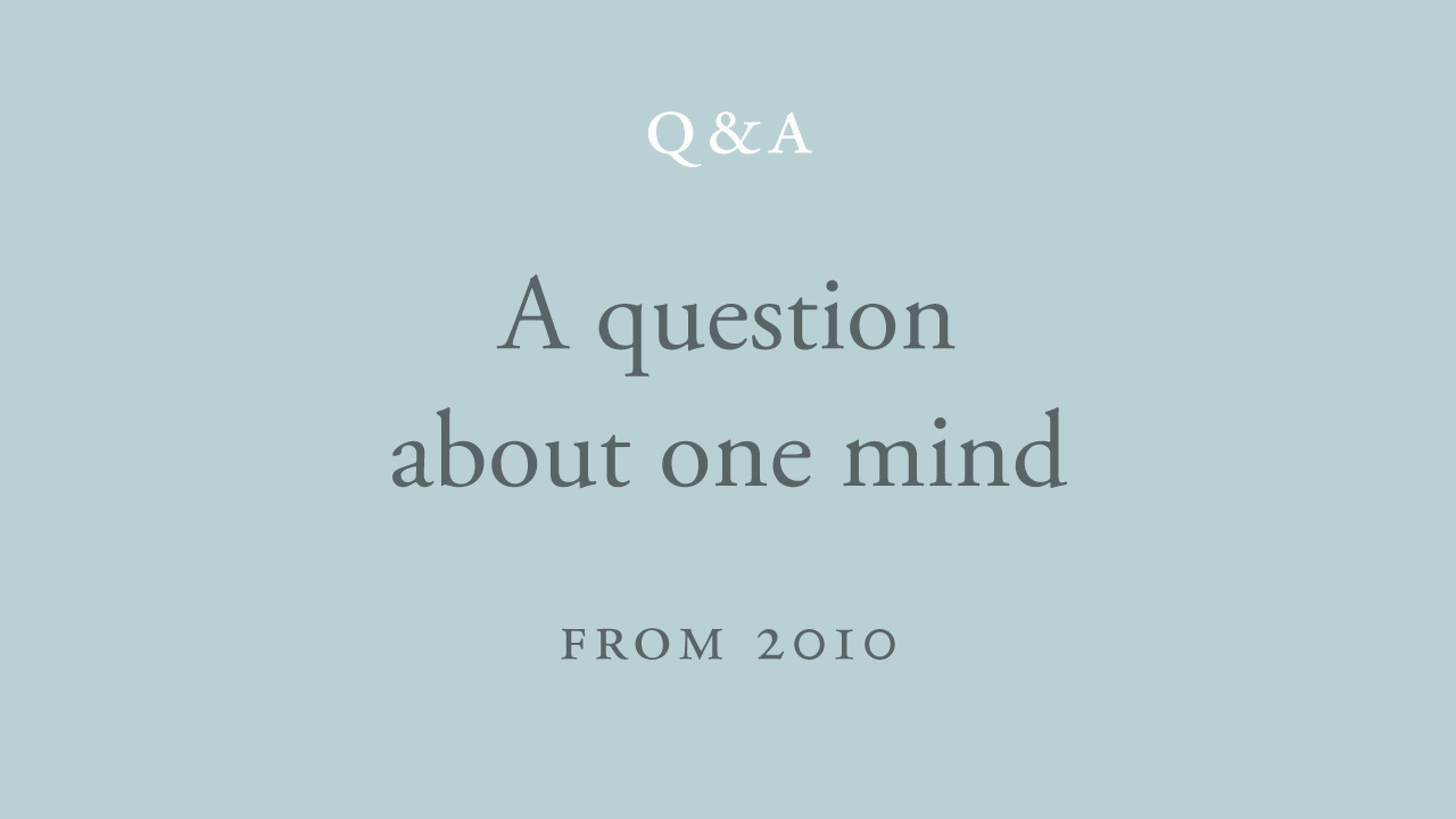 It does require further exploration! The fact that consciousness only experiences itself through one mind is a belief held by one mind! There is no evidence for it. This is called solipsism. Non-duality states that there is only consciousness. Solipsism states that there is only the content of our own mind. These two statements may appear to be similar, but in fact they are poles apart. The former is the source of sanity, the latter insanity.

In order to know anything apparently objective, consciousness must take the shape of the mind. It is by definition only possible for the mind to hold one thought/image/perception at a time. In other words, this apparent limitation is inherent in the structure of the mind. However, it is a mistake to project this limitation of mind onto consciousness and presume, as a result, that consciousness is limited.

Mind B could never appear in mind A, because one object cannot appear in another, so it is impossible for mind A to know mind B. In fact, mind A does not know anything. It is known; likewise mind B.

However, the fact that one object can never appear in another object, or even that two objects can never be present ‘in the same mind’ at the same time, does not tell us anything about that which knows each mind.

In fact, why could there not be an infinity of minds all appearing in and simultaneously known by the same consciousness? I am not proving that this is the case. I am only suggesting it as a possibility, and in doing so exposing the fallacy of the ‘only-this-mind’ belief.

I am not suggesting that my model of a multiplicity of minds appearing simultaneously in one consciousness is an accurate model of experience. There are no accurate mind-made models of the reality of experience. However, I use this model as a possibility to rescue non-duality from being equated with solipsism.

Solipsism is simply an exaggerated form of the ‘I am the centre of the universe’ belief that characterises the apparently separate entity. Non-duality is rather the opposite of this. It is the experiential understanding that there is no centre to the universe.

Love is another name for this understanding in which all seeming things are known to be one seamless garment, made out of consciousness alone, each apparent part intimately connected to all other apparent parts. Even that is not quite true, because of the presumption of parts, but such are the limitations of the mind when speaking of something that is beyond its conception or perception.

Jocelyn: Something you wrote recently on your website in answer to a question arose as a thought – that the idea of the world being an illusion is misunderstood. The world isn’t an illusion – the illusion is that it’s separate. When I read that, it was like a wedge through the brain. So the understanding is that consciousness knowing itself through other minds experiencing Oxford Street or Haiti or the top of Mt Everest is the same consciousness experiencing typing these words.

Ken Wilber (among others) talks about the Unique Self, and gives an example similar to the one you gave of twenty people in the room all experiencing the room differently. He talks about four people sitting around a table with an ashtray in the middle. There are four unique perspectives on the ashtray, so the four unique people, the ashtray and the table aren’t illusions; it is believing and feeling that they are separate that is the illusion. Yes?

Rupert:Not quite! The four views of the ashtray are four images that appear as four minds and are each considered (by each of those minds) to be a partial view of ‘the real ashtray out there’. There is nothing to suggest that these four images do not appear in the same consciousness.

The idea that each single mind is viewed by its own unique consciousness is an untenable belief that is itself the production of the mind. The ‘four views’ of the ashtrays are unique. However, the ‘four people’ who are considered to be the viewers of the ‘real ashtray’ are in fact part of the view. There is no unique self that has a unique view of the real ashtray, but rather each view of the ashtray is a unique view of an ashtray/person.

In other words, the apparent person (the unique self) is in the view, not outside it. In fact, the person is only considered to be a person when it is considered to be the viewer of the view. As soon as it is understood that the ‘person’ is in the view, then it loses its special status as the centre of the universe and simply becomes one colourful thread in the seamless fabric of experience.

There is no person sitting in a room, looking at an ashtray sitting on a table. Rather, there is room/wall/person/thought/ashtray/sound/table/thirst/blue/sensation…an infinitely rich, varied, multidimensional, ever-changing sea of thoughts, images and perceptions arising in and made only out of the colourless, full emptiness of never-changing, ever-present, zero-dimensional consciousness.

In other words, all that is there is presence, being, the is-ness of the ashtray, prior to all names and forms, and because it is our actual experience that this is so, the knowing or experiencing of that being is also simultaneously present.

However, we have already seen that the knowing or seeing of the ashtray is not located in one place and the being or existence of the ashtray in another. But rather, the knowing and the being of the ‘real ashtray/room/person, etc., in itself’ is one simultaneous ‘event’. Therefore, knowing and being are one, knowingbeing, and that is what the ‘real ashtray/room/person, etc., in itself’ is made of.

I have tried to take you from what seems to be our experience to what actually is our experience, to show that, whether we recognise it or not, it is our direct and moment-by-moment experience that our own self, knowingbeing or consciousness, is the ever-present reality of all seeming things. Experience is always and only consciousness’s timeless knowing of its own being. That is all that is ever known and all that ever is.

However, for the mind (and as the mind) they are real. That is, the mind is real from its own imagined point of view. So now it is possible to see clearly that things, selves, others and the world are not real as objects, not real as they are normally conceived to be. However, as consciousness they are reality itself.

The top of my head is tingling – often an indication of a perceptual reorganisation! Just writing this out has helped – thank you for listening!

Well it might be! This understanding shakes the presumptions of the mind at its roots and leaves what is considered to be its firm ground looking very shaky!

With much love,
Rupert