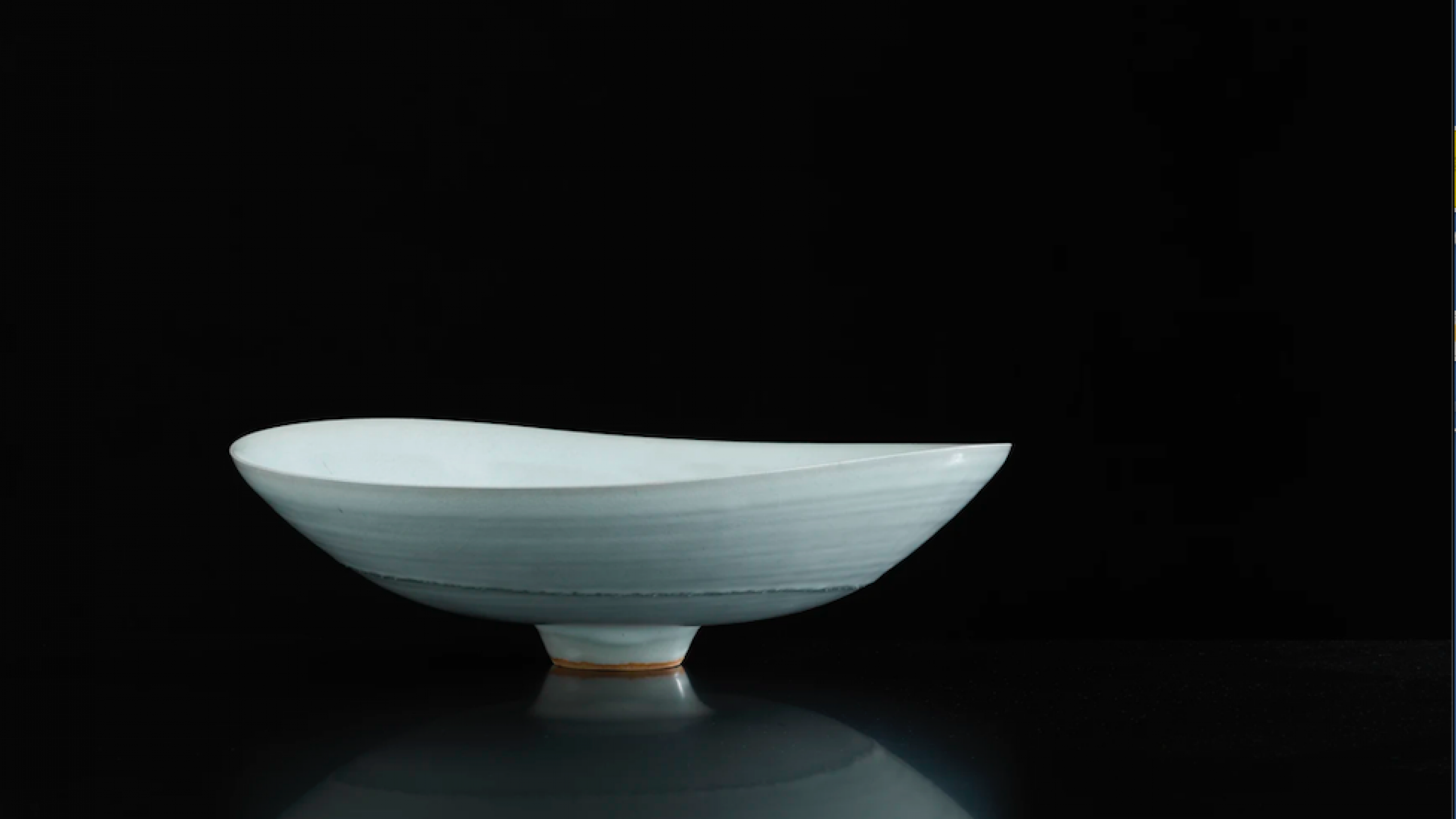 The Indian philosopher Shankara, in The Crest Jewel of Wisdom, tells us that just as stone, wood, grass, grain and straw are all in time reduced to dust, so the body, the senses, the mind and the life-breath return to the nature of the higher Self. Darkness is dissolved in the radiance of the sun, and all that is manifest melts away in the Eternal. And just as space remains untouched when a clay pot is destroyed, so the Eternal remains Eternal.

The first bowl was probably intended to contain water or food: its form is therefore dependent on one of the most basic of human activities, that of eating and drinking. On another, more metaphorical level, it can also be said that a full and open bowl both withholds and offers in a single measure and in the same gesture. An empty bowl is different, as it holds the potential for either giving or receiving. This coincidence is a reflection of the state of contemplative consciousness, in which all things are born and to which they all return.

When a potter throws a bowl, a plane of clay is extended into three dimensions. As it expands, the clay both contains and is contained by space. This ordinary and wonderful characteristic, which is shared by all objects in the world, is emphasised by the process of making; the potter causes the clay to move upwards, defying the law of gravity, and then counters that action by using centrifugal force to open out the rising mass into the shape of a bowl. The interplay of these movements, one vertical, the other horizontal, is revealed as a balance of opposing energies. This relationship is individualised by the film of clay, which has the capacity to retain, in three-dimensional form, every trace of the potter's touch. This form, perhaps glazed or otherwise decorated, is then sensed and interpreted in relation to other things, both found and made. A 'good' bowl is brought to a point where all these qualities cohere and coincide. There it rests, suggesting the possibility of further growth, but restrained by poise and balance.

In the Daodejing, Laozi speaks about the importance of 'what is not'. Although the spokes are indispensable, he says, they are not the hub of the wheel. Cut doors and windows into the walls of a house, using their nothingness to make a room. Mould clay to make a vessel. Adapt its nothingness for the purpose in hand.

Is the bowl a specific form of spatial articulation, or is it that with which the space is articulated? It is both these things, and neither. A bowl, in its totality, is beyond definition. A truly beautiful bowl is suggestive of infinity; it is perched on the boundary between fullness and emptiness, revealing their inseparable identity.

Such bowls have the capacity to lead us back from the physicality of an object to the state of pure consciousness in which it was conceived and manifested. When this happens, the bowl, as a material object, seems barely to be present. It challenges and plays with our understanding of reality; it defies conventional notions of substantiality. Something that is beautiful, according to this definition, holds our attention without allowing it to become static, leading us effortlessly to that which is present but non-objective. In that respect, the beautiful thing could be said to 'vanish'. It follows that there is little that can helpfully be said about a bowl of this nature; it leaves little trace of itself and yet transforms the viewer or user - not dramatically, but with subtlety and gentleness. Such a bowl is both impersonal and intimate.

The making of this kind of impersonal object, perhaps paradoxically, demands extraordinary attention to detail. Every aspect of the creation of a beautiful bowl must be considered with great clarity and affection, and it may take many years of mastery of all the physical and technical aspects of making pots before the prerequisite skills are internalised and become instinctive. Even then, this special element of selflessness cannot deliberately be attained; it chooses, in a sense, to be manifested. Consequently, the artist or craftsman cannot directly aspire to the accomplishment of beauty, but if the potter's work is going to be anything other than physically functional or superficially attractive, this ideal must be embraced and given the opportunity to realise itself.

Your praise of God is a breath
From your body of water and clay.
Make it a bird of Paradise
By breathing into it your heart's sincerity.
Rumi, The Mathnawi

The quality of selflessness cannot be understood, much less attained, without a degree of transformation, or clarification, of individual consciousness. This clarification involves the unfolding realisation that all activity (be it thinking, feeling, sensing, perceiving, or acting) is fundamentally spoiled and reduced by the belief or feeling that what we are is limited, finite, or separate. The dawning of the understanding that real being is, in fact, infinite, is not a great or extraordinary experience; it is, rather, thoroughly intimate and familiar, precisely because it is always before and within us, even though it may be temporarily veiled by the conviction that the opposite is true.

A consequence of this understanding is the perception that beauty is not the property of an object, and that it is inherent in the true substance of all things. Substance, pure consciousness, is externalised as loving awareness and action. The more clearly that this is seen, the less certainty there can be about anything other than the presence of selfless being. A condition of fearless uncertainty, open and unknowing from moment to moment, that is both vulnerable and indestructible, then makes itself felt.

From such a perspective it might be proposed that a bowl embodies a form of consciousness. In that respect, the maker of bowls is involved in an outward activity that is the reflection of an inner openness, a state of absence that must, with all possible dedication and commitment, be maintained. It is a task that is difficult and demanding, offering the ego's sense of permanence little hope or consolation. In a certain sense it is the lifelong remaking of a single, and utterly unique, bowl - a bowl, what is more, that is ultimately invisible. It is, and contains, no thing.

The art-historian John Hutchinson is Director of the Douglas Hyde

A Man in his Elements

River of Words: The making of pots