Home Publications The Nature of Consciousness 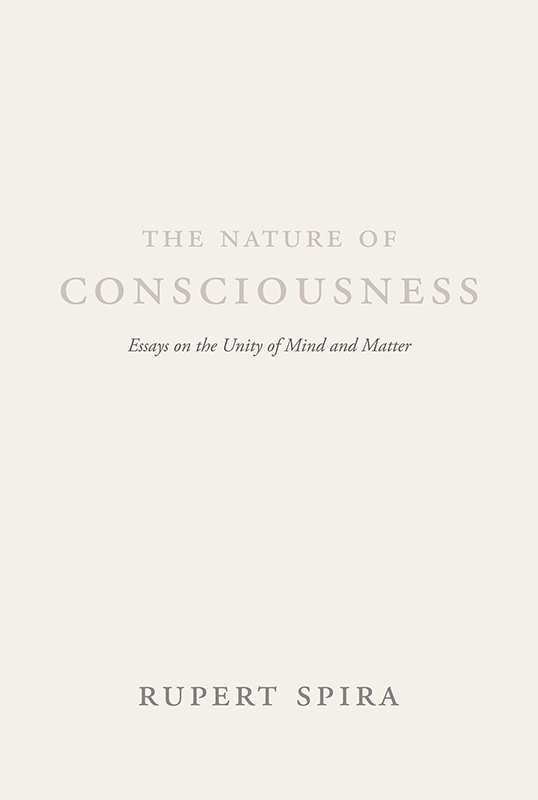 The Nature of Consciousness

Essays on the Unity of Mind and Matter

'The materialist paradigm is a philosophy of despair and conflict and, as such, the root cause of the unhappiness felt by individuals and the hostilities between communities and nations.'
Rupert Spira

Our world culture is founded on the belief that consciousness is derived from matter, giving rise to the materialistic assumption that informs almost every aspect of our lives and is the root cause of the suffering within individuals, the conflicts between communities and nations, and the degradation of our environment. The Nature of Consciousness exposes the fallacy of this belief and suggests that the recognition of the presence, the primacy and the nature of consciousness is the prerequisite for any new paradigm that is to address these issues at their core.

'I’ve gained deeper understanding listening to Rupert Spira than I have from any other exponent of modern spirituality. Reality is sending us a message we desperately need to hear, and at this moment no messenger surpasses Spira and the transformative words in his essays.’
– Deepak Chopra, author of You Are the Universe, Spiritual Solutions and Super Brain

'Rupert Spira guides his reader on a delightful journey of discovery that uncovers and reveals what the Kashmiri Masters have called “the greatest secret, more hidden than the most concealed and yet more evident than the most evident of things”, and that is consciousness itself. Rupert deserves to be congratulated for the clarity and sensitivity with which he presents the teachings of the ancient and modern Masters concerning consciousness, and his own deeply personal experience, in such a way that it can be both easily understood and applied.’
– Mark Dyczkowski, author of The Doctrine of Vibration: An Analysis of the Doctrines and Practices of Kashmir Shaivism

'In these essays, Rupert Spira cracks the shell of materialism by elucidating the “calamitous assumption that lies at the root of our materialistic culture”, and he artistically and persuasively leads us to the universal antidote: the realization of the primacy of consciousness. As a scientist, I very much appreciate Rupert’s pointing out that scientists will never truly succeed in their exploration of the world until they successfully investigate the nature of the subject known as “I”.’
– Paul J. Mills, Professor of Family Medicine and Public Health, University of California, San Diego

'The Nature of Consciousness is a major contribution to our understanding of who we are. This is a book which I am sure will become one of the great classics of our time. Please read it, because as we evolve we will all need to understand non-duality.’
– Peter Fenwick, Neuropsychologist and author of The Art of Dying and The Truth in the Light: An Investigation of Over 300 Near-Death Experiences

★★★★★ A Magnificent Antidote for Materialistic Madness
George M. Shears, reviewed in the United States on 13 June 2017
If there were a Pulitzer Prize for spiritual books, I would definitely nominate The Nature of Consciousness by Rupert Spira to win it. Over the past 40+ years, I have immersed myself ardently in most of the great wisdom traditions of the world. This has included intensive practice of vipassana and Tibetan Vajrayana meditation with a number of excellent teachers. For the past 15 years, my main focus has been Advaita Vedanta, Dzogchen and Mahamudra. I have been a very enthusiastic follower of Rupert since I watched his interview with Iain McNay on Conscious TV in early July, 2011. Since then, I have watched well over 100 of his YouTube videos, each one of which I've regarded as an impeccable work of art. I've been so impressed with a number of them that I have laboriously transcribed them into Word documents. Of the many excellent teachers of non-duality I've been exposed to, I have consistently regarded Rupert as second to none.

★★★★★ Simply beautiful
Dr Vikas Pandey, reviewed in the United Kingdom on 26 January 2020
I bought this the day after watching my first Rupert Spira YouTube video in June 2018. I tried reading it several times in 2018 but just could not assimilate the words despite having a reasonable nondual background. I then took it on holiday with my in July 2019 and could not stop reading it – certainly not the way that Rupert recommends reading this, but I could not stop. It opened something, I've read and watched a lot of Rupert Spira but this book is on another level. For me it is among the greatest works of nonduality of all 'time’.

★★★★★ A new classic of Advaita literature
Gandalf, reviewed in the United Kingdom on 30 January 2018
An eye-opening book with great clarity and power to unveil, Rupert's best book so far ;) I enjoyed reading it very much. Rupert was able to skillfully put into clear words of this generation what has been secrets over the ancient times. It will occupy an important place in the history of Advaita literature.

★★★★★ Illuminating, accessible, life changing
Singingteacher, reviewed in the United Kingdom on 27 September 2017
Rupert is one of the clearest teachers I have come across and this book is both accessible and enlivening. Even Deepak Chopra who is one of the world's most renowned spiritual teachers in the world is bowled over by Rupert's work. I honestly cannot recommend this book enough – both for beginners starting out on their exploration of non-duality or spirituality and people who have been 'walking the path' for years. This work will change your life.